Veterans and VA employees will remember Sept. 11, 2001, this week. Here are just a few of the events.

Linnea F. Shirley, VA public affairs specialist at the Amarillo VA, interviewed Veterans and VA employees, asking “Where were you on 9/11?” Here is her video of their memories as Veterans and employees tell the story of that day and how it impacted them.

“This event ensures that we never forget and honor the sacrifices of nation’s first responders and military heroes,” she said.

The wall is 6.5 tall by 24 feet long. Dedicated in October 2017, it consists of eight granite panels and has a 13-foot steel beam from the World Trade Center wreckage atop concrete columns that represent the twin towers.

A commemorative moment was held during the opening ceremony of a Homeless Veterans Stand Down Sept. 9 in Montgomery, Alabama, according to Sheila Marie Austin, public affairs officer at the Central Alabama VA. The event was live streamed for those not in attendance. 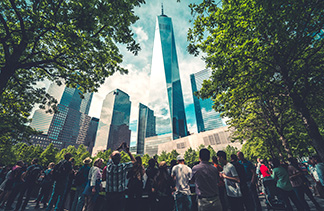 Fresno VA will place a wreath in their Walk of Honor Memorial Garden. They will partner with the Fresno Kiwanis Club for the annual Valley Heroes Parade and Festival.

Cleveland VA had a 9/11 Ceremony streamed on Facebook live on Sept. 9. The Cleveland Institute of Music performed the national anthem and God Bless America.

Muskogee VA handed out over 1,000 lapel pins to Veterans. Moments of silence will be announced at 9:30 am and 2 pm at all sites over intercom systems. Muskogee High School ROTC will perform drill ceremonies on campus.

Maine VA will participate in the 9/11-Wing Family Day with the 101st Air Wing and the Maine Air National Guard Military and Family Readiness Office. Over 700 attendees are expected.

Biloxi VA’s director will have a radio interview at the 9/11 Shuckers minor league baseball game. The game will be dedicated to the military. Plans are for a Veteran to throw out the first pitch.