Sony and PlayStation announced the arrival of new skins for the console and its accessories, featuring camouflage colors that will complete the look of one’s preference in their gaming experience. The new PS5 skin cover, DualSense controller skin, and the Pulse 3D wireless headset will all get the new camo colors courtesy of PlayStation coming this fall.

A sleek and stylish attempt at PlayStation covers and customization is coming from Sony, and the company’s announcement of the new camo covers brings new options for gamers worldwide. PlayStation’s latest blog post detailed the Gray Camouflage cover set not only for the PS5 but also for its peripherals available for all.

Sony focused on different faceplates for the PlayStation 5 last year, and of course, that is not the end of it for the Japanese multinational tech manufacturer. One of the most famous colorways and designs for gaming is camouflage, taking inspiration from the many action shooter games which popularized it for the world.

The company is offering preorders of the new camo covers for all starting September 15, and it would be accessible via the PlayStation Direct website.

Read Also: Water-Cooled PlayStation 5 Mod Coming Soon for Custom Orders from YouTuber-Is it Worth It?

When is the PlayStation Camo Covers Coming? 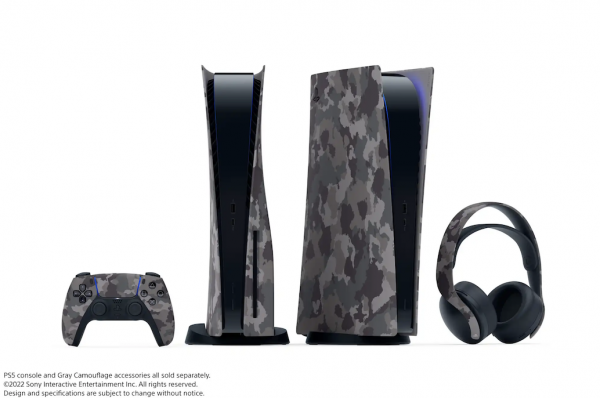 PlayStation and its Console Customization

On the PlayStation’s 2020 release, the company brought the white console to the world and gave everyone a new look for the console which veered away from its black-themed device for all, available for the longest time since the PS2. Different companies brought different custom skins and colors for the console, with one offering an all-black PS5 for all.

However, SUP3R5’s offer was too good to be true, with some claiming that it is a scam, especially as it came at a time when the console’s stocks and availability are seeing significant hardships in distributing to the world. The company then refunded all customers and closed down shop, as they cannot fulfill PS5 deliveries for all.

Another known company behind this was “DBrand,” a Canadian manufacturer that offered “Darkplates,” which also pulled out from its sale of the black console covers.

Sony’s patent for the PS5 Faceplates was troublesome for customization companies that aimed to bring new looks to the console for all.

PlayStation 5 skins and customization are now abundant from the company as they offer faceplates that bring different colors for the console, and are now available for the DualSense controller and the Pulse 3D headset. The latest camo covers would bring an additional option that would suit gamers’ preferences on military-themed colors for their setup.

This article is owned by TechTimes

ⓒ 2022 TECHTIMES.com All rights reserved. Do not reproduce without permission.